I’m home!   What a trip.  Now it is time to bring everyone up to speed on the things seen, and learned.  First, I want to note that after the first posting I realized, that that NOT having spell check is really, bad for a person who is challenged from a spelling perspective and that typing on a tablet is really rough.   The positive is that over the next few weeks I will be posting about the trip, just a month later than when it happened.

It seems like I missed spring while I was gone.  The peonies and irises at my house bloomed and died, and I came home to summer heat.  The State of Minnesota voted on its final budget.  State Representative Jim Nash went to bat for us wrote a bill asking for funds for the Peterson farm.  I was called in and presented to the State Legacy committee. When I came home, I learned that the State passed the bill and we were awarded $160,000 for restoration work at the farm.  With the state commitment, it will qualify us for the Jeffris match.  That means we have a good $240,00 start to our capitol fundraising.  Note: we cannot spend the funds until after the fundraising is complete.

Now for the trip.

After my daughter Virginia, her husband Dave, and my son Dain left for home, I started my studies with a trip to visit Lena A:son-Palmqvist at the Nordiska Museet in Stockholm. Lena is the Avdelningschef, Kunskap och förmedling, or in English, the Department Head for Meditation and Knowledge, which believe is is close to the Education Department Head, in the U.S.  As I learned, some things just don’t translate exactly.  Some funny stories on that, to come.

Lena did her PhD thesis on Swedish farm buildings and properties in Minnesota. So we had a lot to talk about.  I asked about “korn” and what Peterson meant when he said he “painted” the roof of the barn.  She said korn was not American corn but rather Peterson most likely meant barley. While traveling Sweden, I learned the word korn as found in Peterson’s diaries is more correctly translated as a kernel of grain. If American corn is meant he would use the word maize.  During his Swenglish period, he uses both English and Swedish words at the same time- hence Swenglish.  So in some passages, as in 1859 he talks about korn- meaning barley- then talks about planing korn in mounds, which is a method not done with barley- only American corn.

Lena and I discussed what Peterson meant when he said he painted the roof of the barn.  With what?  She said it was tar, used to make it water proof.

Our conversation lasted a couple of hours.  I was able to find and purchase her thesis, “Building Traditions Among Swedish Settlers in Rural Minnesota” on Amazon and ordered it to be delivered to the CCHS.  She also suggested I purchase “Scandinavia Overseas” and “America’s Architectural Roots” which I did via Amazon and also had delivered directly to the CCHS.  Following our visit I toured Skansen. 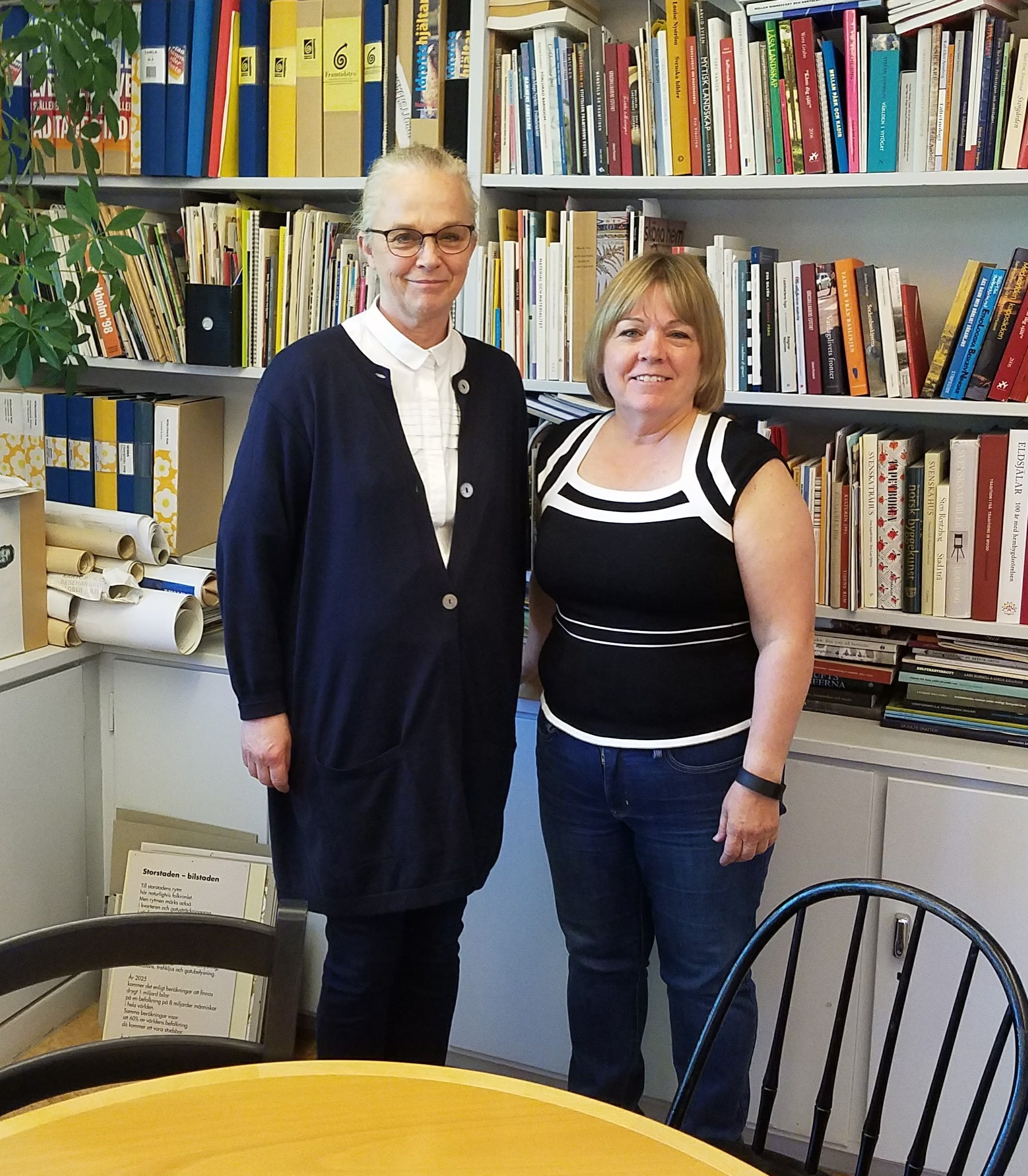 Below, left is a photo of the Nordic Museum and on the right is Skansen.

Skansen if not the oldest, is one of the oldest open air museums in the world.  It is in the same vicinity as the Nordic Museum and the Vasa Museum.  For those who have asked if I visited Vasa on this trip, I did not, as I had visited before and because with a limited time, I needed to focus on building structures.

The two areas in Skansen I focused on were the sections about southern Sweden buildings and farm animals. 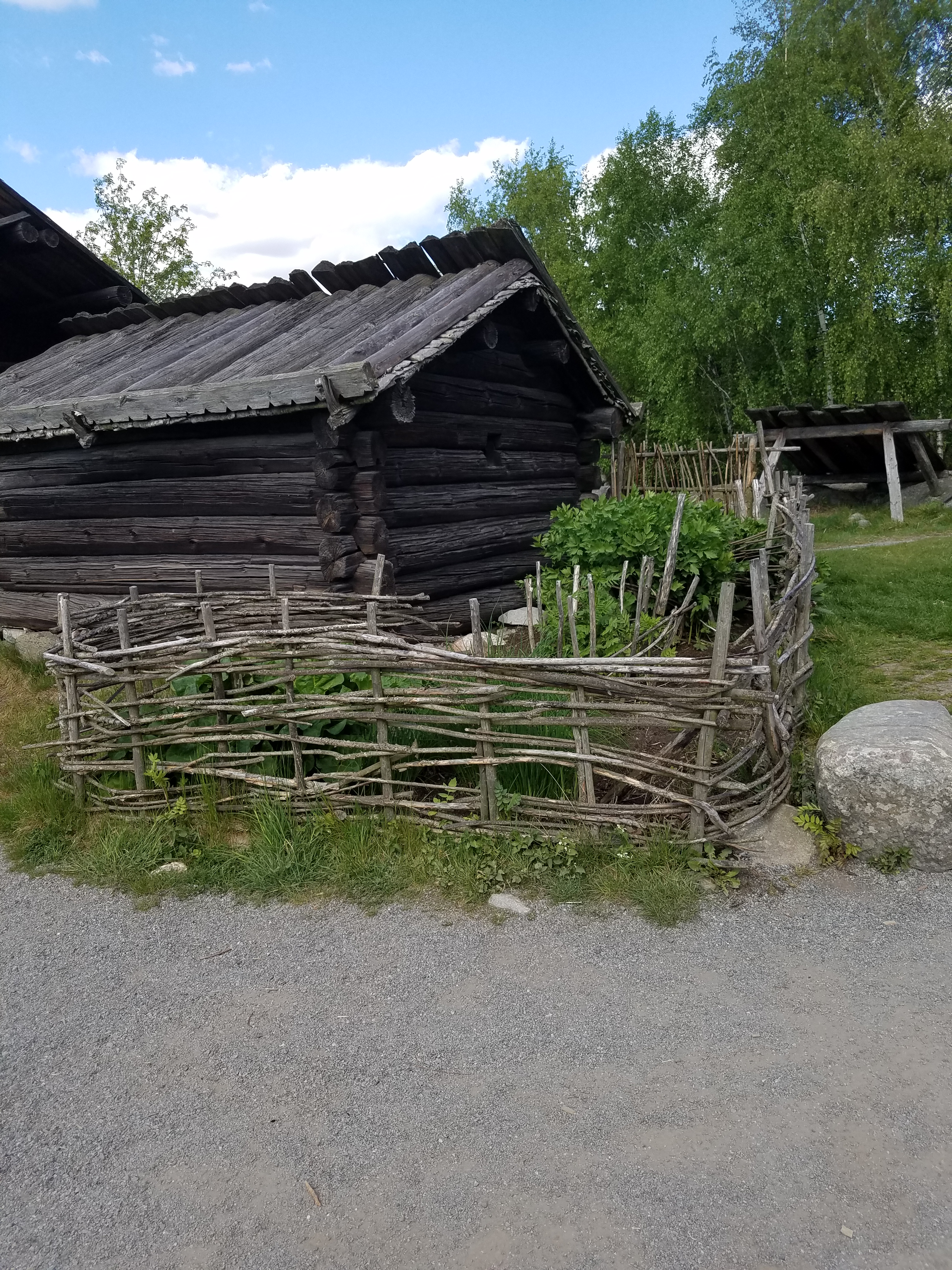 Knowing we would be putting up fences, I took a number of photos of fences and in the Smaland area. I found a 1900-1910 house that had the same type of ceiling found in the Peterson house.   The knowledge that the ceiling in the house may be not as early as we thought was of concern, as if we interpret the property to 1885 to coincide with the photos taken at the farm, the ceiling in the house would have to be removed.  Note the color of the ceiling and the wall paper. 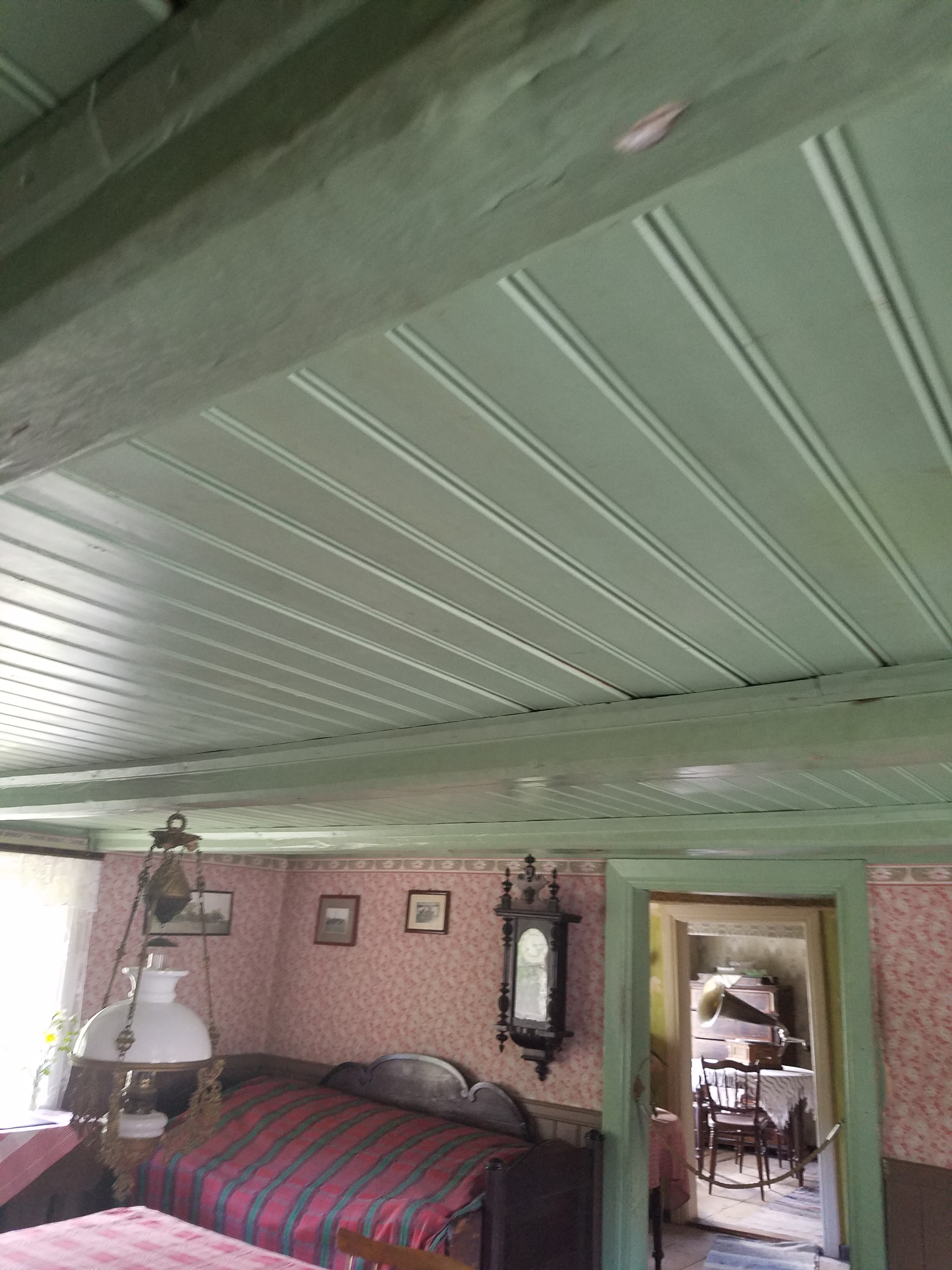 The below bench was of interest, as it is a style used both in Sweden and is seen here in the U.S.  This makes the style a possibility for use at the farm. 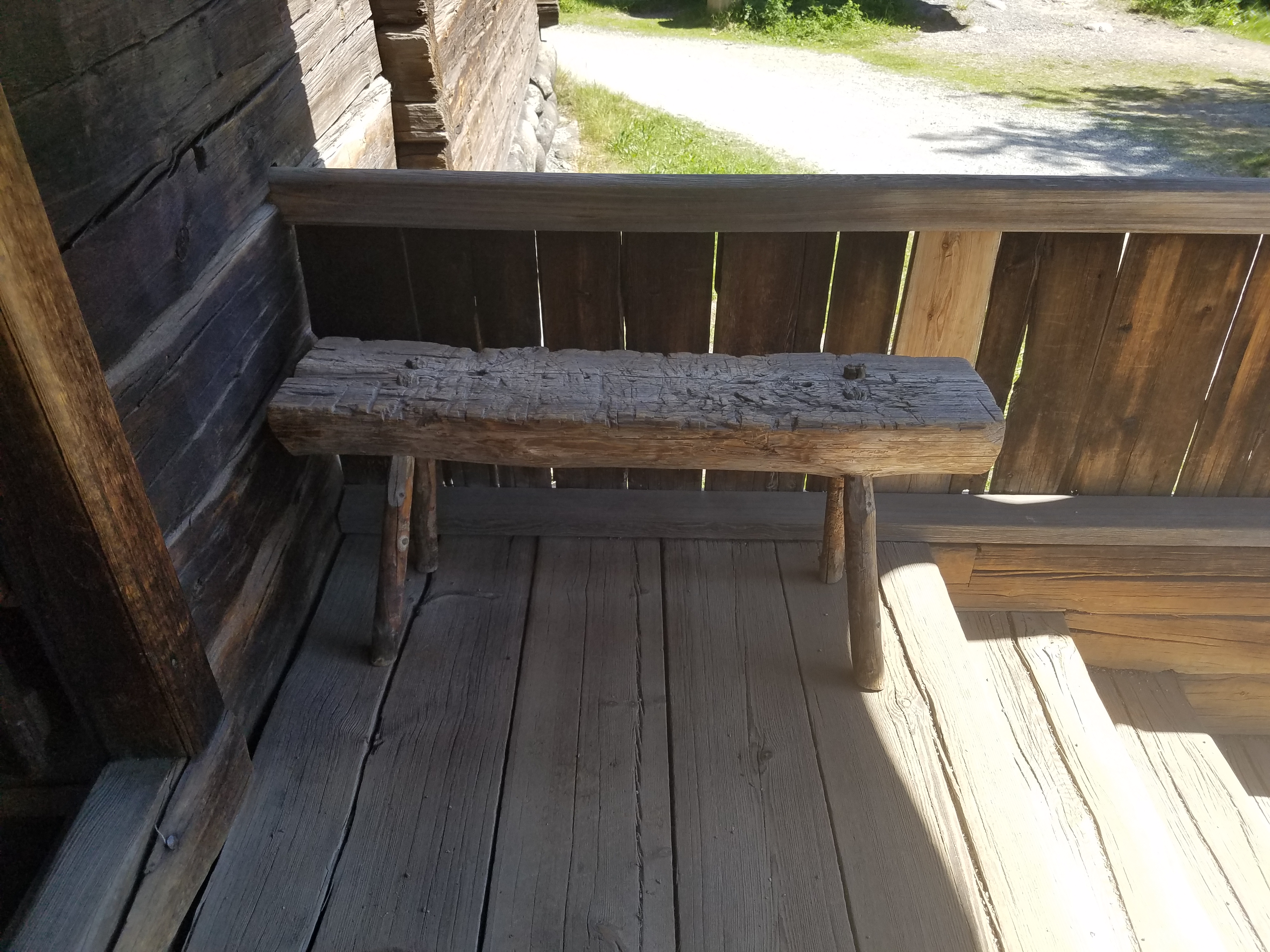 Finally, I want to leave you today with a beautiful photo of a house at Skansen representative of a house in Smaland.  Note the thatched roof with wooden logs holding it down.  The windows are white but the corners are not.  Which was a quandary for us when deciding how to paint the north barn.  The question of to paint the barn corners or not was confirmed by Lena at the Nordic Museum.  She explained the painting as follows. 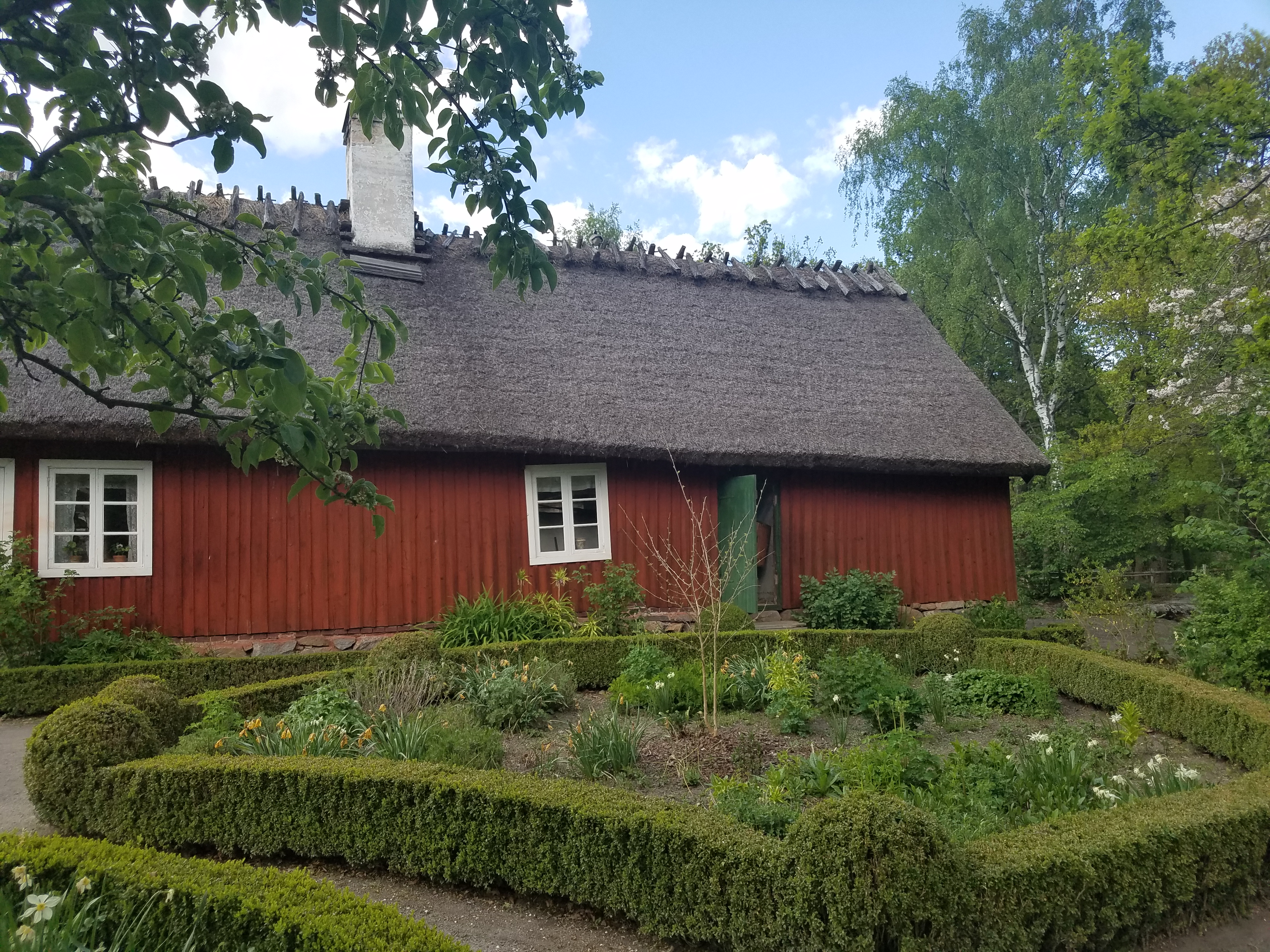 The Falun Copper mines produce the mineral that makes the Swedish red unique.  Once all buildings were completely red.  Red paint was cheap, white was expensive.  Therefore, only accents on houses, such as windows and corners were white.  Then, more wealthy people started accenting the windows in the barn white and the population followed suit.  Next, the wealthy class painted their houses yellow and some people followed suit.  Today, you will find barn doors painted with tar resulting in a black color.  Most barn corners are not white.  White barn corners are more of an American invention.  As we discussed, the option to paint the Peterson north barn corner white or not, we looked closely at the barn wood.  It was indeed originally red, later the white trim was added.  So, I present to you, a fully restored first time ever published photo of the Historic Andrew Peterson Farmstead north barn!!

Ok, you have to click on the link.  Some time technology really, is not up to par, or the user still can’t figure out how to get a photo off her phone.  But, you can click on the link above and see the photo.  Once, the technology of moving a photo is mastered, I’ll get the photo posted,  honest.

Next time:  Birka, and Uppsala