It is with a continued great amount of appreciation that I thank the Sando Foundation for providing the funds for a new furnace in the Farmhouse and funds to complete tuck pointing on the house.  The choices of where to use the funds were based on the recommendations found in the Historic Structures Report, and the simple fact that the furnace died in December.

In this blog, I would like to show the work stone mason Patrick Sieben is doing at the farm, and  why we chose to use the funds donated in December, the way we did.

The photo below is part of the Chaska brick addition Andrew Peterson added onto the house.  In his diaries, he talks about the large Chaska brick kitchen addition and the two large pantries. The corner is located on the south west corner of the addition.  The brown you see on the right is part of the main house. 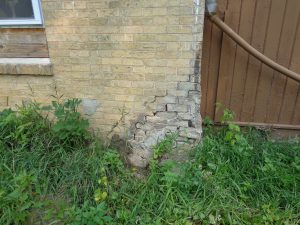 The bricks can be seen clearly falling away from the house.  The cause is a simple long time malfunctioning down spout.  It is amazing something so simple can cause such damage.  The previous owner, poured cement over the spot and used the same to try and replace the missing mortar.

The problem with this solution is that it is like placing a band-aid on a wound without fixing the source of the problem.  In fact, using cement made the problem even worse.  The cement compound is stronger than the simple mortar used in the 1870s.  This meant that as the cement moved with heating and cooling, it further damaged the mortar and moved more bricks out of their original location.

In the below and above photos note some stones that have pulled away from the foundation.  The width of the wood planks are 18 inches! 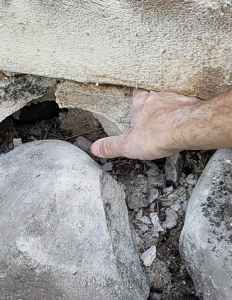 It will take a few more days to repair the foundation and replace the bricks, but I’ll be sure to post photos when it is complete.

The last photo is Patrick and his two journeymen sons working on the north wall.  Patrick will be doing some small repairs on the smoke house as well.

The Middle (1914) barn foundation has completed tuck pointing.  The photos from that process are not as dramatic. Patrick tells me that that foundation was in very bad shape as well.  So much mortar was gone, that in some places he could put his arm into the wall up to his elbow!  We are very happy to say that the wall has been repaired.  Thank you to Representative Nash for securing the funds to stabilize the middle barn!!!

The Jeffris Family Foundation challenge grant process has started.  In the next week, you will see a donation button on our website marked as donating to the Jeffris Family Foundation challenge grant.  Pledge forms will also be going out soon.  Please consider donating.  You can also contact me directly at wbiorn@co.carver.mn.us.  As you can see from the photos, we are making progress.